It is the year 2059. The planet Earth has gone through radical changes. Even though all european nations and states all across the world tried desperately to increase cooperation among each other, the politicians helplessly had to watch how economy and especially some big corporations strengthened by a wave of fusions gave globalisation an uncontrollable drive. While they tried on the political level to overcome cultural disparities in small steps, the big mega companies dissolved territorial and cultural borders, started to gain influence worldwide and took control -unknown to the public- of the main areas of social life such as education and art to be able to manipulate the masses in their means. 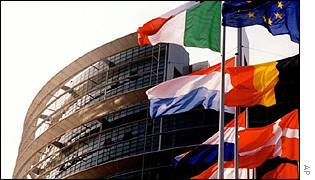 Law and Order were changed in order to fit the needs of the companies or were simply abandoned. Facing an increasing unemployment rate and poverty spreading around everywhere, people's price fell and human right became a foreign term. And even in the places where the law still worked, new kinds of depedence were found to force people doing anything.

The nearly -- fight of the last -- politicians found its end five years ago when finally all european banks denied to give more credit to the nations and seized all national property. From this time on even the old Europe was divided among the the companies...

During those times, when most of the people could no longer afford to have moral, new kinds of entertainment evolved that would have been impossible in the past. Huntings, high speed racing and big fighting spectacles, which are presented by the mass media in an breathtaking but harmless way, are not only very popular but are also necessary for many people to make there living if they survive. In the same places where ambitions of sport once existed now evolved dangerous games, during which people risked everything including their lifes, to gain wealth or just to be able to pay their debts. Many unnamed "guys" find nothing but there end.

Some sort of especially dangerous "sports" are the magnetic hover races, where -- on racing courses or in arenas engage each other, while strong magnetic fields make it nearly impossible to steer the vehicle for the unexperienced drivers. But if they are successful and get known to the audience, then they eventually loose the veil of the unnamed driver. The top pilots are valuable and who gains this status, can lead a luxuary life. In some cases those "Magnetic Masters" can end their carriers with enough money to stop worrying.